A nervous energy filled downtown Mombasa on the afternoon of 27 March. It was the first day of Kenya’s dusk-to-dawn curfew to curb the spread of Covid-19, and baton-wielding police were patrolling the streets of the coastal city as people rushed to get home. Confrontation was expected. Kenya’s police have a reputation for being heavy-handed even without the excuse of enforcing a nationwide curfew. But no one anticipated the brutality that was about to take place.

The centre of the violence was the Likoni ferry terminal. Huge crowds had built up as commuters tried to get on ferries which were running at lower capacity due to new social distancing rules. Suddenly, hordes of police officers in riot gear appeared. They threw teargas into the crowds, lashing out at innocent men, women and children and forcing them to the ground. Dozens were made to lie on top of one another while others sat choking, vomiting and rubbing their burning eyes.

How the television news reported events at the Likoni ferry terminal

In the following months, police unleashed a torrent of violence on Kenya. At least 15 people were killed by officers during the first nine weeks of curfew alone, according to Kenya’s Independent Policing Oversight Authority (IPOA). At least six additional deaths are also being investigated by the IPOA, as well as allegations of shootings, robbery, harassment and sexual assault by police officers.

Amnesty International Kenya said that the Covid-19 pandemic provided “the perfect storm for indiscriminate mass violence” by the police.

“There is a pervasive culture of impunity among [police] service members who rely on systemic corruption, a lack of accountability and the limited capacity of oversight bodies to avoid justice,” says Demas Kiprono, campaign manager for safety and dignity at Amnesty International Kenya.

Now, Amnesty International Kenya is one of four rights groups – along with Haki Africa, Kituo Cha Sheria and International Justice Mission Kenya (IJMK) – who are attempting to hold the police to account for the bloodshed on the streets. They have collectively launched a lawsuit against the police, calling for compensation from the government and an end to impunity for acts of violence inflicted upon the civilian population. 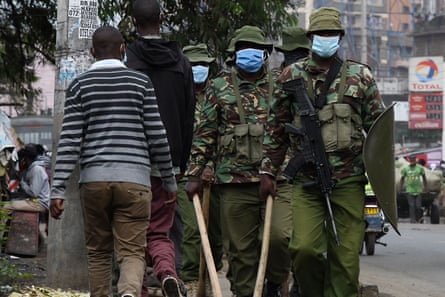 “We hope … to see police held to account for misconduct and for this accountability to create a deterrent that stops the problem for good,” says Benson Shamala, director of IJMK. “As it is, the problem of police killings and violence is a recurrent issue that sees too many lives torn apart.”

When Covid-19 began, guys were jumping in the river, people got hit by cars running away from the police

Among those families seeking justice is Hussein Moyo, whose 13-year-old son was shot in late March at his home in Kiamaiko, one of the poorest neighbourhoods in Nairobi. Yassin Moyo was reportedly standing on a balcony with his siblings watching police enforce the curfew when officer Duncan Ndiema took out his pistol and fired into the air, hitting the boy in the stomach. He died on the way to hospital. Following a public outcry, Ndiema was charged with Moyo’s murder in June and released on bail the following month. 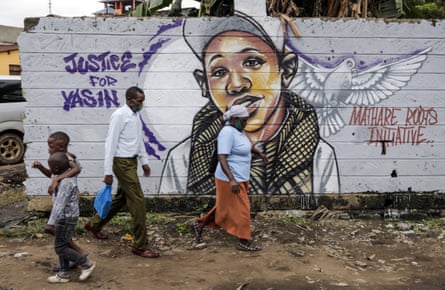 A mural dedicated to Yassin Moyo in the Nairobi slums. The 13-year-old was shot when police officer Duncan Ndiema fired his gun in the air. Photograph: Khalil Senosi/AP

To a large extent this is a story of poverty. Much of the violence in the early weeks of curfew was dealt out to Kenyans living in slums, where cases of police brutality were already commonplace.

“When Covid-19 began, guys were jumping in the river, people got hit by cars running away from the police,” says Mwangi. Everyone has a story about police brutality and harassment, but, says the activist, if you’re poor you fear the police more than anything else.

David Anderson, professor of African politics at the University of Oxford, argues that the ingrained problem of police violence has its origins in the foundations of policing in Kenya during British colonial rule more than a century ago.

Initially the police force was the preserve of the white settler, says Anderson, leading to arbitrary arrests, mass incarceration, torture and the murder of tens of thousands of Kenyans by the state. By the time the country became independent in 1963 the police force was hardwired as a key agent of state-sanctioned violence. 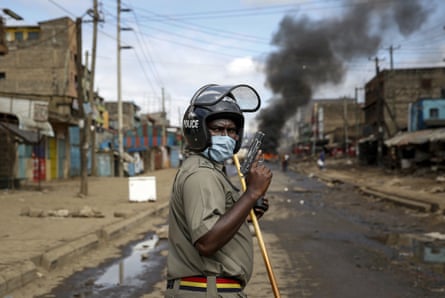 An armed police officer during clashes with protesters near a barricade in Kariobangi, Nairobi, in May. Photograph: Brian Inganga/AP

Over the last decade there have been attempts to curtail the power of the police. Kenya also now has the IPOA, which investigates all deaths where police have used force.

Yet far from acknowledging the problem of police violence, the authorities have generally blamed instances of brutality on rogue individuals.

“Some of these policemen are very young and … they can easily get drunk with the little power they have,” said Charles Owino, the police service’s official spokesperson, on television in June.

As anti-police protests sweep Nigeria, Kenyans have also been taking to the streets in protest at the police brutality that was so starkly exposed by the pandemic.

A new generation of activists are also emerging to lead the fight to end the violence.

Juliet Wanjira has emerged as a central figure among a new generation of young, fearless activists drawn mostly from Kenya’s informal settlements. In the weeks following the implementation of the curfew, the 25-year-old from Mathare, one of Kenya’s poorest neighbourhoods, led two protests against police brutality.

“When the curfew started, things got very bad very quickly,” said Wanjira, whose older brother was murdered in 2007 in a suspected police killing. “I want to say I’m surprised but I’m not. The police aren’t there to protect us, they’re there to protect the interests of those in power.”

Wanjira is co-founder of the Mathare Social Justice Centre, a community-based human rights organisation calling for an end to Kenya’s extrajudicial killings. Since its foundation in 2015, other communities have followed suit and today there are more than 30 such centres across Kenya.

“I strongly believe we can have a just society,” said Wanjira. “To achieve that, we have to focus on the system itself. That requires a complete mindset change. I want the police to realise that they are poor people just like us, fighting not for their own gain but for the benefit of a few rich people out there. They need to wake up.”